Vybz Kartel Gets Visit From Spice And Sikka Rymes 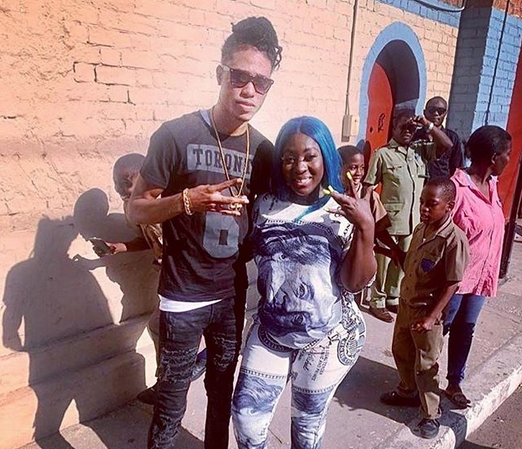 Vybz Kartel got a special visit from his friend Spice recently.

It may not quite be the “Conjugal Visit” but Spice recently visited her frequent collaborator Vybz Kartel in prison.

On Thursday Spice and Sikka Rymes went to check up on the ‘Worl Boss’ as he continues to wait on his appeal verdict.

This is not the first time the “Rolling” star has checked up on Kartel, as she reportedly visits quite often. This time, however, fans actually got a snap of the Queen of Dancehall at the St Catherine District prison.

Spice was spotted after Sikka Rymes took to Instagram to post a pic with them both at the facility. In the photo, Spice can be seen smiling while striking a pose with the Gaza VP outside the correctional facility.

Spice’s visit did not go unnoticed by fans, as hundreds flocked to social media to voice their opinion.

“Big up to spice thts my bbz big up ❤️❤️❤️❤️❤️😍😍😍free world boss,” one fan commented while another declared “All now sum man nuh visit the Teacha yet dem ah bawl out free Worl Boss every damn day……..smh……unuh fake like.”

Spice and Vybz Kartel have maintained a strong bond over the years, frequently collaborating on a number of singles.

The chemistry between both deejays is evident on a number of tracks including; “Ramping Shop,” “Conjugal Visit,” and “Back Way.”

Although fans have long speculated that their relationship is more than friendly, both deejays have always brushed this off.

Vybz Kartel is currently waiting on a verdict in his murder appeal trial. He was sentenced to life in prison for the 2011 murder of Clive “Lizard” Williams.