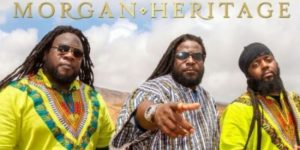 The 2-time Grammy winning reggae band released “Loyalty on August 2, ahead of their their intercontinental journey tour.

Local Motion by Hawaiian reggae band Pepper, is this week’s number one album, while Collie Budz “Hybrid” project is at number 2.

Elsewhere on the charts, VP Records’ Reggae Gold 2019 effort claims 4th spot, Koffee’s Rapture (EP) is at 8, while Xyclone’s “The Year Of The Wolf” remains in the top 10 at number 9.